puppy
All about lesbian slavery 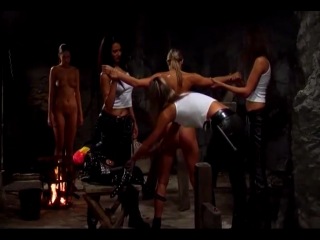 Since I noticed that a lot of you are into Boundheat productions, here's Mistress of Souls.

The story is that, in a dystopian future, a woman is taken captive by a rich oil producer, who asks her to cooperate and give up the location of her father's book, containing informations about alternative methods of producing electricity. Since she refuses, she meets the same fate as the other slave girls: she is stripped of most of her clothes (only allowed to wear some panties that barely cover anything) and toil in the factories, producing fuel, under the whip of the mistress. In the meantime, other slave girls are used as ponies to carry the mistresses around.

Barbaria1 said:
So much for a nice day at the beach ...

Never argue with the beach life guards, no matter how oddly dressed they are!

Yes. They are safe from all the scheduled train traffic.
But the caped madman has a personal grudge to settle with these two ... they've foiled his plans too often in the past!

This time it's up close and personal, he won't rely on anyone else to do it ... just his own muscle ...

Today I have a lot of captives for you to choose

A serie of pics from MKane. Sometimes captives must be secured