carloscruz said:
The story didn’t get a lot of acceptance. As I said it isn’t even my kind of execution, but it came to me.
Here you have another three of my poor sketches to help you to visualise how exactly we were sent to feed the fish.
Click to expand...

It's a matter of personal preference, I can see the uniform adding something, but for me nude is preferable.

Drowning was one of the methods of execution used in the French Revolution. A celibate priest and a nun would be tied together naked, and then thrown in the river. The link has some interesting pictures. 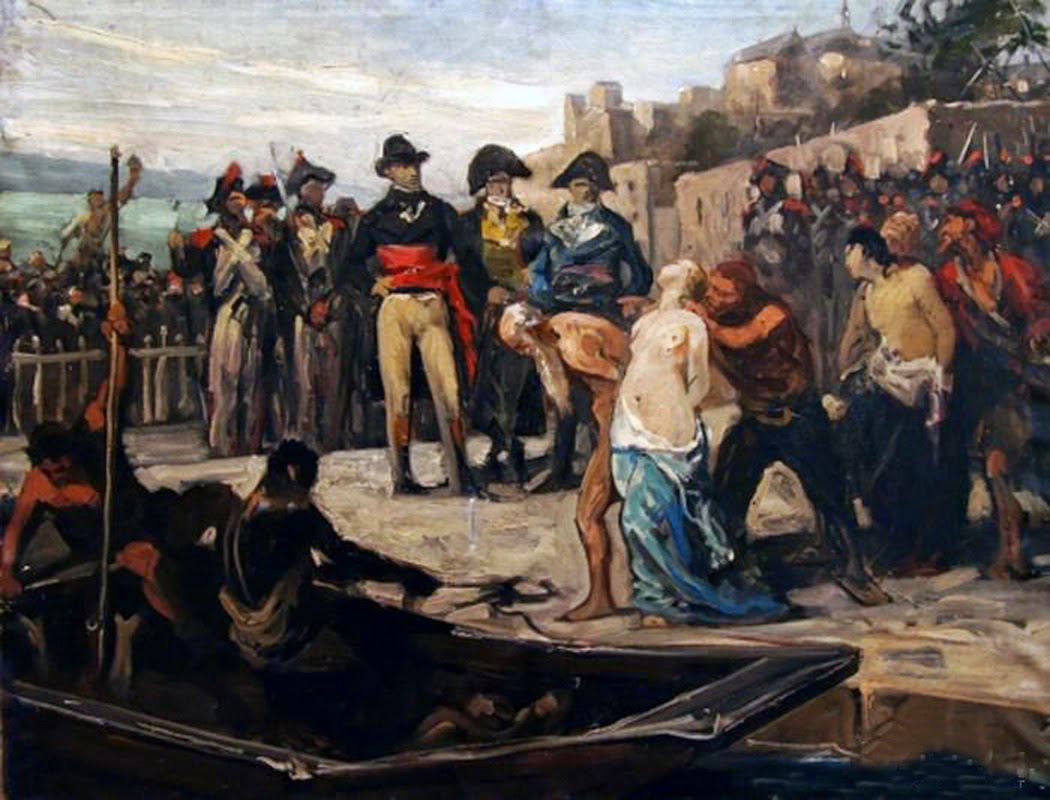 en.wikipedia.org
"How ironic! I am using a cross to kill, for the first time in history!"

It's a matter of personal preference, I can see the uniform adding something, but for me nude is preferable.
Click to expand...

Thank you for the comments, I am glad you liked it!

Staff member
The gag is wrong, but otherwise there is a certain quiet dignity to this pic that fits your story well imho.

You see, you got me googling

phlebas said:
The gag is wrong, but otherwise there is a certain quiet dignity to this pic that fits your story well imho.

You see, you got me googling

It is absolutely perfect!
Thank you for adding it to the thread!

Thanks for taking the time to answer!

RedOrc said:
Drowning was one of the methods of execution used in the French Revolution. A celibate priest and a nun would be tied together naked, and then thrown in the river. The link has some interesting pictures.

Coincidentally, this painting was the first pic I ever posted on CF, somewhere in April 2015!

Loxuru said:
To my opinion not. I prefer completely naked.
Click to expand...

A very charming and passionate little fantasy, @carloscruz made beautiful by the sincerity of your storytelling

CruxGirl said:
A very charming and passionate little fantasy, @carloscruz made beautiful by the sincerity of your storytelling.
Click to expand...

Thank you! I I valued opinion coming from such a writer! @CruxGirl

I found among @chinadoll wonderful work in Deviant Art, an image I thought perfect for this story.
I asked her and she gave me permission to post it here and was kind enough to modify it even.
Thanks!

carloscruz said:
Drowning has never been my idea of execution, but two weeks ago I was swimming in the ocean with the bottom about 4 meters beneath my feet.

The idea came to me and I removed my bathing suit, tied it to my wrist, and crossed my feet and my wrists at my back.

I imagined the situation I describe in the story and got an rock-hard erection while I floated naked.

Let's see what you think.


It has become a vicious and cruel war. No surprise, since it was very close to a civil war.

Both countries had been in the same federation for decades. Had separated and later ended up in a nonsense war against each other.


It was a paradox that when they were not killing or executing each other, the soldiers of both sides behaved almost like colleagues.

I was a Navy officer, second lieutenant, and many of us had served together in the former Federation's Navy.


It was difficult to establish who started it but by now, both sides considered the captured officers traitors and executed them summarily.

In the navies, the custom has become to “feed the fish” with them: To throw them into the sea with an old cannon ball tied to their ankles.


And senior Lt. Hitomi and I, were now prisoners.


She was my commanding officer and the captain of our ship. A small missile-torpedo boat. I was her second in command and I was also totally in love with her.

But of course, I had never showed any sing of it. She had enough with taking care of our fifteen man and women crew. Besides, it would have been totally improper.


The previous night we had been part of a naval force that attacked by surprise the main enemy naval base. We received a direct hit and part of our warheads exploded.


With half of the crew dead and the ship burning and rapidly sinking, Lt. Hitomi ordered to steer to the enemy beach and run the boat aground. With this, we were able to save six of our men and women before our ship was totally destroyed by a final explosion.

Soon, a truck with some troops showed up. Two of the enemy soldiers helped us with the wounded and we were told to get in. They didn't even pointed their guns to us. Where could we go? We were in the middle of their naval HQ!


We reached a wharf and Lt. Hitomi and I were told to get down and report to an enemy petty officer who was standing at mid jetty. Two more prisoners, male and female young lieutenants, from our navy were standing close to him.

We, being officers, knew why we were there. We said goodbye to the others, wished them good luck and walked to the man.


I noticed on the ground several iron balls with attached chains, ready for us.

The petty officer nodded to Hitomi.


-Madam, I guess you know what to expect, isn't it?

-We are going to feed the fish, isn't it? – answered Lt. Hitomi with great poise.

-I am afraid you are right Madam. We'll have a launch for you soon.

-Understood. We'll be ready to board. – she said.


We officers were supposed to behave properly in front of danger and death, of course.

Hitomi had always kept her cool in action and had led us well. I was proud to have served under her command, but now I admired and loved her even more.

I read admiration also in the eyes of the others, including the enemy NCO.


Now we said hello to the other two fellow prisoners. They were from a different flotilla, but we knew them by sight from our base. They saluted Hitomi, she was one rank above the rest of us, and we exchanged a few words of tense greeting.

-Your uniforms are not edible. Please disrobe completely. – Ordered now the NCO.

So, the rumours were true! The prisoners were executed naked as an extra humiliation! We looked at each other a little startled until Hitomi recovered and started to remove her clothes. We followed her lead and soon we were standing on the wharf stark naked.

I looked at Hitomi´s body and couldn't believe my eyes. Her body was so beautiful! Much more than I had imagined!

Her breast had a perfect shape and size, her pussy had a sexy line of trimmed pubic hair.

Her buttocks were a pear-shaped perfection!


She had even undone her severe military-style bum and let her dark hair loose over her shoulders.

I blushed. I had always been a pervert. I was excited by really kinky things. Executions among them. It never interfered with my military duties, but I even had dreams of submission and of being executed.

Of course, I didn't want to die, but I was unable to avoid being excited by the situation and my cock was already half erect before we had to strip.

Now, watching Hitomi, it got even harder. She observed my erection and gave me a playful wink.

The other woman, was gorgeous too, but I was in love with my captain.

I looked at the other male and noticed he was also hard. But he was watching me! I was clear he was gay. He was smiling apologetically to me.


I returned the smile, letting him know that I didn’t mind and it was all right if he could get some pleasure from me.


At that moment, a launch appeared entering the harbour and approaching our position.

-All right, here comes your ship. You know the drill- said the Petty Officer. – Get on the line, arms at your back, please!

We obeyed and formed line abreast. Lt. Hitomi on the left, me next, Will the male lieutenant and Ana the female, last. With our wrists crossed behind our bodies the petty officer quickly tied us securely. Them he took one cannonball with its chain and put it on Hitomi´s hands.


-Hold this if you don't mind Madam, it will be needed later. – He said.

-Of course! I will make sure it stays with me. – she said with some irony. Next each one of us got his own iron ball to hold.

-You are ready now Madam. – the NCO declared.

-Thank you for your assistance petty officer – said the naked senior Lieutenant formally.

-Aye, aye Madam. Sorry, just doing my duty. I was told you fought well – answered the NCO with respect.


She, like the rest of us, was now fully prepared to board for her last sailing.

much appreciated!! thank you!!
"Neque porro quisquam est qui dolorem ipsum quia dolor sit amet, consectetur, adipisci velit..."
"There is no one who loves pain itself, who seeks after it and wants to have it, simply because it is pain..."
---Cicero, "De finibus bonorum et malorum" (On the ends of good and evil)
Do you want something drawn? Shoot me a PM and let's talk about it!
PRICE LIST HERE: https://www.cruxforums.com/xf/threads/chinadolls-crux-stuff.8368/page-3#post-572671

chinadoll said:
much appreciated!! thank you!!
Click to expand...

Absolutely beautifully done, the weightlessness and serenity really comes across for me.
In the face of evil, resist

I admit Carlos' story captured my attention. Here are some more pics on the theme.

RacingRodent said:
Absolutely beautifully done, the weightlessness and serenity really comes across for me.
Click to expand...

Agreed. But you should see the original @chinadoll illustration. It is a story in a single vignette. Surprising and arousing!

carloscruz said:
It is a story in a single vignette. Surprising and arousing!
Click to expand...

True of many @chinadoll images.